We bet the word oregano brings delicious thoughts of Italian food to your mind. But did you know, along with being a pizza or pasta topping, oregano has more benefits for health than the culinary world? This fragrant herb is well-known for its strong flavor and earthy aroma. And is now gaining popularity in the realm of health too.


Oregano adds as much life to your health as to your food. This pepper-scented herb has many therapeutic and medicinal properties that medical professionals seldom discuss. An easy way of incorporating the benefits of oregano in your life is to try oregano oil.

Oregano oil contains antioxidants and essential antimicrobial compounds. Being nutrient-rich, oregano oil offers many benefits to combat health problems related to the immune and digestive systems. Let’s look at some of these benefits in the light of anti-aging. 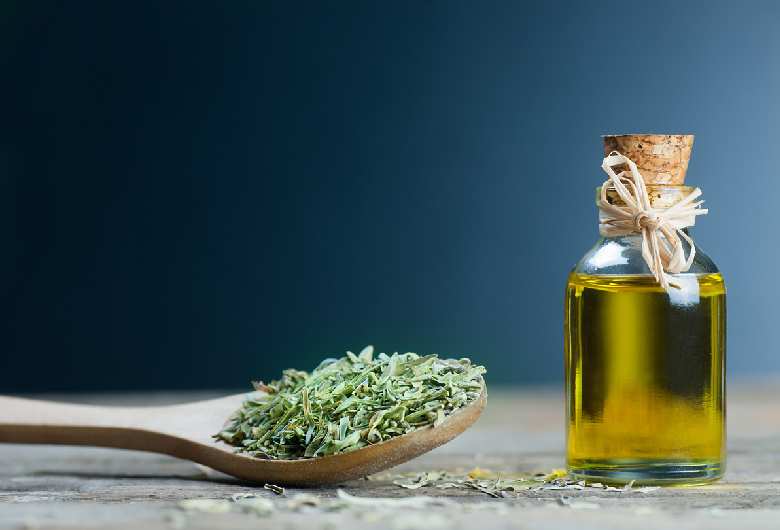 What are Oregano and Oregano oil?

Oregano is a herb that is extracted from the plant Origanum vulgare. This plant is native to parts of Europe and the Mediterranean but is grown all over the world today. Oregano derives its name from the Greek word ‘oreganos,’ which splits into – ‘oros’ meaning mountain, and ‘ganos’ meaning joy. Therefore, this herb is assumed to be the mountain of joy or youth due to its anti-aging benefits.

Also Read – 11 Best Anti-Aging Night Creams In India That Will Take You Back In Your Twenties!

Oregano is usually available in the market as dried leaves and can be added as a flavoring agent to your food. But to get the best of this anti-aging herb, herbal experts from different streams promote the use of oregano oil. Oregano oil has been found to contain antibiotic and antifungal properties.


The concentration of beneficial nutrients in oregano oil is much higher than that in the plant itself. Therefore, oregano oil is not as concentrated as oregano essential oil and can be consumed or applied to the skin. Oregano essential oil cannot be consumed or applied directly to the skin. It needs to be diluted with a carrier oil for topical application. Oil of oregano, on the other hand, is made only for consumption purposes.

How is Oregano oil made?

Oregano oil has a faint tint of yellow in it with an aroma similar to that of thyme. It comes in the form of supplements like pills and capsules. These supplements are the diluted version of oregano essential oil.

Oregano oil has a high concentration of antioxidants. There are also minerals like calcium, copper, potassium, and phosphorus in oregano oil. Apart from these, oregano oil contains beneficial compounds like:

Although few studies prove the health benefits of these nutrients, several investigations show that oregano oil may have potential anti-aging benefits. Let’s look at some of these benefits.

1. Skin aging retardant
Antioxidants are a powerful source of immunity for the human body. They protect the body from the damaging effects of free radicals present in the environment. Free radicals are shown to cause aging signs in the body, like dullness, fine lines, and wrinkles.

2. Natural Antibiotic
Bacteria can attain resistance against commonly used antibiotics. Hence, there is a constant search for compounds that can inhibit the growth of antibiotic-resistant bacteria. The growing demand for antibiotic alternatives, especially for the aging population, has been the focus of the healthcare industry for quite some time now. As a result, scientists are researching natural alternatives to antibiotics.

While comparing the essential oils from various plant sources, researchers found out in one study that oregano oil could inhibit the growth of Gram-negative bacteria (9). This suggests the potential of using oregano oil as a treatment for wound-related, respiratory, and urinary infections. It also proves that oregano oil may be used as a natural antibiotic.

3. Anti-inflammatory
Inflammation is a common problem in the aging population. Many disorders cause inflammation in the body like arthritis, hormone imbalance, varicose veins, etc. There is significant research that has proven the anti-inflammatory properties of oregano.

These studies do not directly advocate using oregano oil to treat inflammation; nevertheless, scientists are optimistic in this regard. Of course, there is a need for in-depth research, but the current studies confirm the potential of oregano oil to combat inflammation.

4. Throat infections
Aging causes the body to be prone to common infections of the nose, throat, and ears. Plant essential oils and extracts have long been used as the first line of treatment for such common ailments. One such oil is oregano oil, highly recommended by herbal experts to curb regular body infections.

A study was conducted on carvacrol, the antimicrobial compound found abundantly in oregano oil. It showed a significant impact on streptococcal bacteria, a common cause of throat infections (12). This supports the use of oregano oil by traditional doctors for the relief of respiratory and sinus issues.

5. Gut health
Gut parasites are a popular reason for gut disorders like bloating and diarrhea. In addition, as we age, our digestive system is prone to poor gut health, leading to further complications. Herbalists have used oregano oil to combat gut-related issues for a long time.

There are not many recent studies to prove the benefits of oregano oil for improved gut health. However, in one study, 77% of patients suffering from gut symptoms showed reduced parasite infection after administering oregano oil (13). Gut health, in general, is associated with many factors, not just gut parasites.

While oregano oil may not significantly impact gut heath directly, it may help maintain gut health by inhibiting parasites. Oregano oil may also help regulate the normal bacteria that live in the gut to prevent irritable bowel syndrome symptoms. But such administration of herbal remedies should be done under the recommendation of a practicing medical professional.

6. Yeast infection
Yeast is one of the neglected causes of infections in the human body. In its normal form, yeast does not pose a threat. But when present in excess, yeast can cause infections in the reproductive system, skin, and genitals. This happens more often amongst the aged population because of their susceptibility to microbes.

7. Immunity support
The immune system in human beings is present in the form of layers of defense against microbes. A compromised immune system leads to an array of ailments, from common cold and allergies to severe kinds of blood infections. This happens at an elevated level as the human body enters a state of aging.

Phenolic compounds have been associated with many plant extracts’ antioxidant and anti-allergic abilities, including thyme, rosemary, and oregano. In a study, rosmarinic acid was found to have an anti-allergic effect on patients suffering from Seasonal Allergic Rhinoconjunctivitis (SAR) (15).

Oregano oil is rich in phenols and rosmarinic acid and may help build immunity to help the immune system track pathogens. This suggests using oregano oil as an antimicrobial treatment, but further studies are required to establish it.

8. Anti-cancer abilities
Cancer is one of the major causes of death and can affect anyone at any age. However, cancer is a risk for the aged population that has seldom been found a successful treatment. Therefore, scientists all around the globe are constantly researching anti-cancer agents. Oregano oil has also be researched for this purpose.

In one study, carvacrol, the principal nutrient in oregano oil, showed positive results against cancer cells in test tubes (16). Thus, researchers believe there is a lot of scope in this direction of using oregano oil to prevent cancer. Studies are being conducted on the same, so we can only hope to see oregano oil become a proven anti-cancer treatment soon.

9. Reduces Cholesterol
Another constant issue with the aging population is that of cholesterol. A sedentary lifestyle, lower metabolism rates, cardiovascular diseases, etc., have been linked to high cholesterol levels. This has led to an increased demand for remedies that help in controlling cholesterol levels.

A study conducted on patients suffering from high cholesterol levels concluded that carvacrol and thymol have a direct link with the cholesterol-lowering ability of oregano oil (17). Furthermore, those who had consumed oregano oil in controlled quantities within this study saw a significant reduction in the level of LDL or bad cholesterol.

10. Analgesic
Analgesics or pain killers have many side effects, especially for the aged population. This calls for finding alternatives to conventional pain killers. For example, herbs like oregano have been used by traditional doctors to relieve pain, but there is no scientific proof to substantiate this.

However, an aqueous extract of oregano showed pain-relieving benefits in a pain test involving rats (18). Though the results of this study seem promising, it needs further investigation and research on humans to conclude the analgesic ability of oregano oil.

How to use Oregano Oil?

Oregano oil is available in different forms and can be sourced from health food shops. We recommend consulting a practicing medical professional before deciding to try oregano oil for yourself. The potency of oregano oil may differ from one product to another because of varying concentrations.

Because there is no standard dose of oregano oil, consider talking to a certified healthcare provider to get the proper advice about consuming oregano oil. You can try capsules, tables, or supplements of other types. Care needs to be taken not to consume or apply oregano oil if you are breastfeeding or pregnant.

Side effects of Oregano Oil

Oregano oil is usually highly concentrated and thus needs to be consumed or applied carefully. In addition, there have been reports of oregano causing certain reactions in people. This has been attributed to the high concentration of phenols, especially thymol, in oregano oil. Symptoms of reactions include vomiting, digestive issues, and nausea.

Summary:
Oregano oil has been used as a traditional treatment for common ailments like cold and flu. It is rich in phenols that have been linked to health benefits such as anti-inflammatory, antioxidant, and antimicrobial. Oregano oil can be consumed as pills or capsules under the guidance of a medical expert. Oregano oil has other promising benefits like anti-cancer treatment, anti-fungal treatment, and lowering cholesterol levels, but further studies are needed to ascertain these. We recommend trying oregano oil for your health challenges but only after the advice of a practicing medical professional. To reap the maximum benefits of oregano oil it is firstly important to know if you need it or not.

Which part of the oregano plant is used to extract oregano oil?
While oregano essential oil is derived from the leaves and flowers, oregano oil is extracted from the steam distillation of dried oregano leaves.

What does oregano oil taste like?
Just like its aroma, oregano oil’s taste too has hints of pepper. It is hot and slightly bitter.

The Best Skin Care Habits For...

Get Rid Of Abdominal Hair With...