What if we told you there is a wonder herb that can tackle fatigue, decrease stress, boost your energy levels, and improve your skin? We bet you’d be flipping excited to know more about this miraculous herb. It is none other than Ginseng – a herb we have all heard about but seldom tried.


Ginseng has made it to almost all the industries concerning women – health, wellness, beauty, and fitness. This time-tested herb is loaded with antioxidants that help your body adapt to stress factors. Hence, Ginseng is one of the most popular adaptogens available globally.

We’re pretty sure you have seen people rave about Ginseng, but never yourself looked at its potential. If our guess is correct, we believe it is time you get to know more about this medicinal herb. So keep scrolling to enlighten yourself about Ginseng and its 15 fantastic health benefits for women. 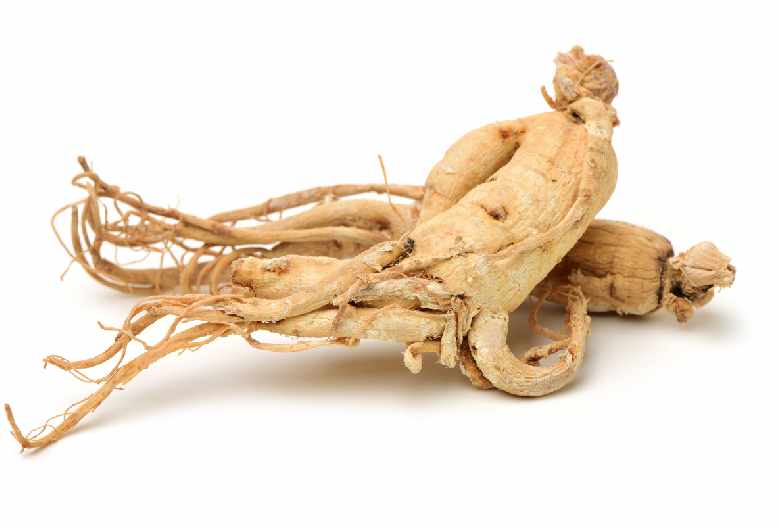 Ginseng is a perennial plant that is grown widely in many parts of Asia and America. Belonging to the genus Panax, this slow-growing plant has many variants, primarily based on its origin. American Ginseng, Siberian Ginseng, and Korean Ginseng are some of the more popular ones. Ginseng is the root and rhizome of the Panax plant, mostly Panax ginseng C. A. Meyer.


The name ginseng is derived from the Chinese word rénshēn, in which rén translates to ‘human being’ and shén means ‘plant root’. Ginseng owes its name to its peculiar shape and forked roots that resemble the human figure. You might mistake ginseng for ginger if you find it in a grocery store. While both look similar, their benefits are entirely different.

There are 13 species of Ginseng, each differing in the percentage of active compounds and their benefits. For example, American Ginseng is Panax quinquefolius, while Korean Ginseng is Panax Ginseng. These popular varieties are believed to relax the nerves, control diabetes, and reduce stress in women.

Why is Ginseng worth trying?

Our busy lifestyle has caused us to overlook our health issues. Many physical and psychological health issues are often found to be linked to stress (1). Experts believe that stress, if controlled, can create a positive change in the mind and body. Adaptogens like ginseng help in managing the effects of stress in the body.


Ginseng has been a part of Chinese and Ayurvedic medicinal formulations for centuries. In addition, Ginseng has been used by Native American tribes for many years and is called the ‘grandfather of medicine’ by some. Ginseng has become a rising star in the world of herbs because of its nutritional value and adaptogenic properties. A study also proved the benefits of Ginseng for the central nervous system (2).

Also Read – 10 Amazing Benefits of Blackberries for Health and Skin

Ginseng is packed with many bioactive compounds, each having its benefits for women. Since Panax ginseng is the most popular variety of Ginseng, let’s look at some of its nutritional compounds:

Apart from these nutrients, Ginseng also contains pectin, vitamins B1, B2, and B12. A study on zebrafish compared the bioactivity of the various nutrients of Ginseng and their potential relation to immunomodulation (6). However, the effects of these nutrients on the human body are yet to be investigated thoroughly.

Ginseng is used in many forms, including fresh, dried, boiled and dried, etc. Based on this, there are two main types of Ginseng available globally:

The main difference between fresh, white, and red types of Korean Ginseng is that the fresh ones are harvested within four years, the white ones between four to six years, and the red ones only after 6 years. A study comparing red and white Ginseng showed positive results in induced-asthma in mice (7), thus indicating their anti-inflammatory benefits for human beings.

Based on this study and several others, brands all over the world have begun manufacturing a variety of ginseng-based products. The most common are ginseng tea blends that help in boosting immunity and relaxing the nerves. Another popular ginseng-based product is ginseng powder.

Ginseng is available as tonics and tablets for different purposes like appetite enhancers, energy boosters, and supplementary capsules. They come in varying concentrations and are best consumed based on the prescription of an experienced medical practitioner.

Ginseng has also made it to the skincare industry, especially in Korea. Many Korean skincare brands manufacture ginseng-based beauty products like anti-aging creams, moisturizers, and face masks. You will also find Ginseng in the form of soft drinks and even chewing gum.

15 Health Benefits of Ginseng for Women

1. Prevents cancer
Ginseng may help in preventing cancer development in women. Several studies suggest that Ginseng can decrease cell growth due to its anti-cancer proliferation abilities (8). In addition, a case-control study proved the possibility of Ginseng to help prevent the occurrence of many human cancers (9).

2. Lowers blood sugar
One disease that most women get affected by is diabetes. Ginseng has for long been tried and proved helpful for those who have diabetes. Both Korean and American Ginseng seems to help control blood glucose levels. In addition, Ginseng is prescribed by traditional Chinese medicine practitioners to those who have type 2 diabetes. In a study on patients suffering from type 2 diabetes mellitus, ginseng supplementation improved glucose control and insulin sensitivity (10).

3. Relieves menopausal symptoms
Women in the pre-menopausal and post-menopausal stages often experience mood swings, insomnia, decreases in sexual arousal, etc. Ginseng may help with such symptoms and improve them over time. A review of existing evidence proved that Korean red Ginseng has positive effects to help with hot flashes in menopausal women (11).

4. Improves sexual health
Ginseng has a popular nickname called ‘King of Herbs’ and for a good reason. For centuries, Ginseng has been tried, tested, and trusted for its aphrodisiac benefits. A study concluded that red Ginseng could improve sexual function in pre-menopausal women (12). Women facing fertility issues may also benefit from Ginseng. This is clear that Ginseng has been an integral part of fertility treatments in Chinese, Ayurvedic, and ancient tribal medicines in America.

5. Increases energy levels
Tea blends of Ginseng are used as energy boosters for those suffering from fatigue and stress. There have been many reports from around the world of women feeling less lethargic with regular consumption of Ginseng. In one study, the antifatigue effects of Ginseng were experimented with and proven to be helpful in patients suffering from idiopathic chronic fatigue (13).

6. Fights inflammation
One of the well-known effects of Ginseng is its ability to fight inflammation. Inflammation in women can occur due to several ailments like autoimmune diseases and infections. Therefore, the effect of Korean red Ginseng was investigated in a study. It concluded the benefits of Ginseng as an immunosuppressive agent in people suffering from atopic dermatitis (14).

7. Reduces stress
The adaptogenic ability of Ginseng makes it an effective treatment for anxiety in women. Ginseng may help alleviate stress levels in women – physical as well as psychological. A study concluded that red Ginseng might positively affect oxidative stress by increasing antioxidant enzyme activity in post-menopausal women (15).

8. Boosts immunity
Traditionally, Ginseng is prescribed for those who have a compromised or weak immune system. Many pieces of literature have described the role of Ginseng in maintaining the homeostasis of the immune system. A study found the possibility of Korean red Ginseng to improve immunomodulation in patients who have colorectal cancer (16).

9. Improves memory
Ginseng is known for its ability to boost concentration and learning. In addition, it may provide a short-term boost to memory, as suggested by some studies. For example, in one study, fermented ginseng extract enhanced behavioral memory in patients with Alzheimer’s disease (17).

10. Fights microbial infections
As the human body ages, the ability to fight microbial infections reduces. This calls for a boost in immunity and the assured synthesis of healthy immune cells like T cells, B cells, macrophages, natural killer cells, etc. One study confirmed the anti-microbial activity of Ginseng’s polysaccharides on a variety of microbes (18).

11. Combats flu
When consumed as a supplement, Ginseng may help combat the flu. Numerous studies have linked Ginseng to the prevention of flu. While this seems promising, one must be careful with oral consumption of Ginseng as it can only be used as a supplement and not as a daily dietary element.

12. Treatment of PCOS
A common disorder in females all around the globe is Polycystic Ovary Syndrome or PCOS. It is a condition that often goes overlooked but is associated with symptoms like irregular periods, excess hair growth, weight gain, etc. It is assumed that 1 in every 10 women suffer from PCOS.

There is still ongoing research about the benefits of Ginseng for PCOS-affected women. But one study linked Korean red ginseng extract to treating polycystic ovaries in rats (19). However, the effect of the same in women requires in-depth investigation but seems promising.

13. Normalizes hormonal balance
Women suffer from numerous disorders because of hormonal imbalance. It affects young girls, pre-menopausal women, and post-menopausal women. The ginsenosides in Ginseng have been researched to show estrogen-like activity in several studies. In one study, significant estrogenic activity was found in ovariectomized mice treated with ginseng doses of varying concentrations (20). But the benefit of the same is yet to be researched and proven in women.

14. Anti-aging effects
Aging skin is prone to the degradation of collagen fibers, which is the reason for conditions like fine lines, wrinkles, etc. Ginseng has been associated with a prolonged lifespan historically. Research has proven the use of Ginseng in inducing the production of collagen (21). In one study, a mixture of medicinal plants, including Ginseng, had shown a reduction in the loss of skin moisture which is known to be one of the causes of skin aging (22).

Side Effects of Ginseng

Ginseng is generally considered safe for consumption, but like any other medication, the pharmacological effects of Ginseng need to be considered. Therefore, it is important to stick to a recommended dose and not overdo treatments with Ginseng. It can work as a supplement, but its role as a part of daily diet is being investigated.

Although there are not many studies with substantial proof about the potential side effects of Ginseng, there are reports of it causing symptoms like insomnia and dizziness (24). In addition, prolonged use of Ginseng is found to cause ginseng abuse syndrome, but this has not been backed up by any serious studies (25).

Summary:
The slow-growing plant ginseng has been used in Chinese medicine for centuries. Available in 13 species, ginseng is popularly found as American and Asian (Korean) ginseng. Historically, ginseng is believed to prolong life, boost energy levels, and treat several ailments. Research on the effects of ginseng in the human body is still going on, but numerous proofs indicate the benefits of ginseng. The roots of ginseng contain bioactive compounds that have found interest in the minds of several researchers. Some of these compounds are known to treat stress, autoimmune diseases, and much more. With the rising interest in adaptogens around the globe, ginseng has made it to the list of proven adaptogens and is now being consumed worldwide to cure many health issues.

How long does it take to experience the benefits of Ginseng?
As stated earlier, research on the benefits of Ginseng is still under process. Based on the health concern, Ginseng may take months to show a visible effect in the human body. However, a study revealed that Ginseng, if consumed at a dose of 200mg per day, will take around 4 weeks to improve mood changes and cognition (26).

What is the best time to consume Ginseng?
It is recommended to consume Ginseng before meals. For beginners, we advise starting with lower doses of Ginseng. Search for products with concertation of 2-3% total ginsenosides (27). Ginseng can also be consumed raw, but this requires the advice of a practicing medical professional.

5 Early Signs Indicating That You...