‘Fish Pedicure’ – What Should You Know About It?


Be it a weekly regimen or an occasional indulgence, women simply cannot ignore the importance of pedicure. It not only makes the bottoms of our toes free of dry skin and calluses but also makes them look healthier, fresher, and prettier. You can find a lot of pedicure salons around that can help make your walking comfortable while taking care of the aesthetic beauty of your feet. They opt for a variety of methods to treat as well as pamper the tootsies of their customers and ’fish pedicure’ is one of the most interesting ones among them. The technique has earned both popularity and criticism since last few years and in this post, we will be discussing it in details. Let’s start: 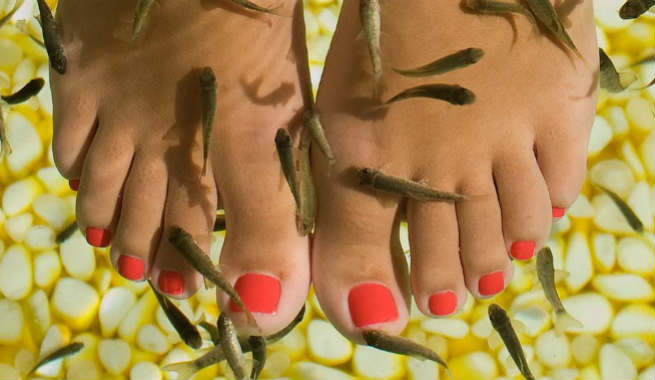 Just like a regular pedicure, the fish pedicure also focuses on making the feet of a person softer and smoother. However, the practice involves submerging the feet of the client in warm water kept in a small tank filled with almost 20 to 150 pieces of tiny (less than 4-inches in size) toothless silver-colored carp called ‘Garra Rufa fish’ (Cypriniformes family) or ‘Doctor Fish’ or ‘Nibble Fish’. This breed of Dr. Fish species is basically native to the Middle East countries like Turkey, Malaysia, Syria, Singapore, Jordon, Iraq, Japan, Iran, etc., and propagated in the USA, Europe, and Asia successfully. They are either fed randomly or deprived of enough food so that they can snack on the dead human skin. Hence, they simply nibble the dry and rough skin away from the toes of the person, thereby leaving the feet beautifully exfoliated. While sucking and scraping away the dry skin, the fish gives a feeling of light massage as well as a sensation of relaxing. A session of fish pedicure can last from 10 minutes to 30 minutes based on the preference of the client. The charges also vary from one session to another.

According to The Huffington Post, it was in 2006 when a concept similar to fish pedicure emerged in Asia (precisely, in a fish spa resort in Hakone, Japan) to treat a number of skin diseases while another research says that it is a 400-year old practice originated in Turkey. At that time, Garra Rufa fish was used to make rough skin smooth, and heal skin conditions like eczema, psoriasis, etc. However, the practice gradually spread across countries, such as China, Spain, Croatia, France, Hungary, etc., and numerous salons and spas started offering the service. In 2008, the first fish spa was opened in Alexandria in the U.S. and the same was launched in the UK right after 2 years. 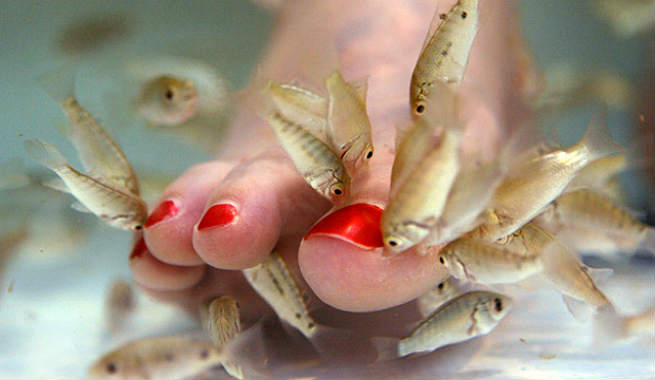 Also Read – Tips for Manicure and Pedicure for Do It Yourself Beauty Enthusiasts! Here

When you let a lot of fish eat up your feet, you actually do a favor to the skin on your toe. This natural pedicure acts as a simple and effective therapy for our feet in the following ways: 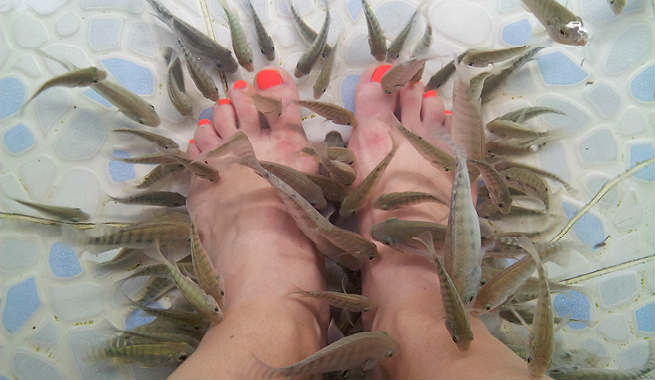 Now, one question you might want to ask us, ‘is fish pedicure safe’? Well, the practice has been banned in certain Canadian Provinces as well as US states while the UK Health Protection Agency has been looking into its safety standards. So, let’s consider a few concerns which have already been raised by people around the world:

Though no infection or any other kind of illness caused due to fish pedicure have yet been reported, it is always recommended that choose a fish spa / salon that follows all health and safety regulations religiously.