Many of us obsess about our nails. Caring for them with nail and cuticle cream, regular manicures, painting them with the season’s colours and visiting nail spas to get pretty art done- is something we indulge in at one point or another. But despite all of this care, we notice that our nail starts showing horizontal ridges that mar the beauty of your well-maintained nails. These lines are called Beau’s Lines (1). Beau’s lines are usually the horizontal or sloping depressions in the nail and can be seen in the fingernails, toenails, or thumbs.


Beau’s Lines can also significantly occur along the running nail bed which can cause the moon-shaped white portion of the nail at its origin. The term Beau’s Line was derived in 1846 by the French physician Joseph Honoré Simon Beau, thus the name (2). It primarily occurs when the growth of the nail slows down due to various health-related factors that affect the nail’s matrix. Scroll down to know all about Beau’s Line –

The primary symptom of Beau’s Lines is the occurrence of a single or multiple horizontal lines going across the nail. The ridges usually start occurring over a small area of the nail and then eventually elongates to cover the entire nail plate. Although, what might start as a minor line or dent may turn into a more visible depression and can sometimes end up affecting all of your nails. Since nails grow slowly, about three millimeters per month, Beau’s Lines that affect the nail matrix won’t register in the nail plate for weeks or months.


Beau’s Lines are completely harmless and will eventually grow out as your nails grow. 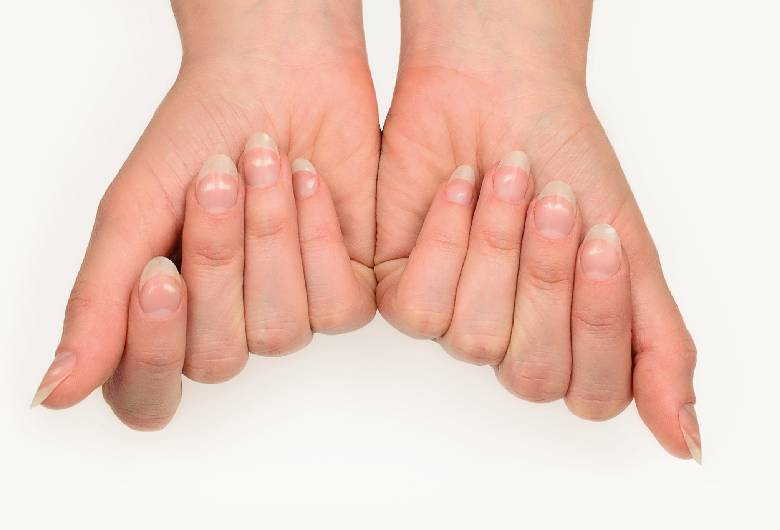 While Beau’s Lines are completely harmless and there is nothing to worry about, let’s examine the underlying causes. (3)

Beau’s Line can appear even due to the slightest casual injury. If these Beau lines occur in a single nail, then the cause can be attributed to any local trauma that has affected the nail matrix. For example, you might have bumped your nail against some hard or sharp surface or the nail would have jammed between a door and that would cause a ridge to appear. In such cases, Beau’s lines start appearing because the nail eventually stops producing new cells on a daily basis as a result of the injury.


Apart from this, the other causes of Beau lines could be extreme cold or hot weather, or even fever. In such cases, from the Beau’s line, it is possible to measure the time since new nail cells were not produced. The nail grows at a rate of 0.1 mm per day. Depending on how far Beau’s line is from the cuticle, it is possible to calculate the number of days since new nail cells were produced.


Zinc deficiency could also be a major reason that could cause Beau’s lines (4). Include food that contains zinc, proteins, and other nutrients in your diet when your nails slowly start developing fine lines. Also, if they occur in all your nails, do not brush it out as something that can be covered with nail polish or try to heal it using any nail cream. Ridges along all the nails point to some systemic disorder like heart trouble, measles, extreme fevers, or side effect to some drug. If highly neglected, it may also end up causing extreme brittle nails that tend to break easily.

Inflammatory conditions such as psoriasis (5)  may also cause infection around the nail plate. Other generic causes include a common side effects of chemotherapy, nutrition, or vitamin deficiencies, illnesses accompanied by high fever, metabolic imbalance, and reduced blood flow to the fingers.

How to overcome Beau’s Lines

If you start getting Beau’s lines, wait a while to see if it is temporary. If it is temporary and caused due to some injury that you are aware of, wait until the pain subsides and then think of getting a nail enhancement done to cover up the line until it grows out. Paint your nails in a bright color to camouflage the imperfection.

Beau’s lines will eventually grow out on their own. They do not need any specific treatment. However, it is strongly recommended that you visit a doctor if there is constant pain or soreness, as it may signify a serious underlying medical condition like the illnesses listed above.

If you are sure it’s the harmless version of Beau’s lines and you do not wish to cover it up, then here are a few tips which you can try at home –

1. Moisturize and hydrate your nails thoroughly. This can help in minimizing the appearance of ridging while protecting the natural keratin layer of the nail.

2. Avoid keeping long nails as they are at risk of breaking or getting painfully chipped while doing daily chores.

3. Do not bite or pick the skin around your nails as this might weaken your nails.

4. If you wish to camouflage the uneven texture of your nails, you may buff them gently to even it out a bit.

5. Treat the cuticles gently and with love. Cuticles work as a barrier for the fingers to keep dirt and infections out of the tissues of the fingers thus reducing any further damage to your nails.

6. Reduce water exposure as it often strips off the natural oils and emollients from your skin, resulting in dryness and causing brittle nails.

7. Maintain a nutritious and vitamin-loaded diet. Increase the intake of leafy and green vegetables that contain zinc amongst other nutrients.

Summary
Beau’s Lines are the horizontal ridges or lines that appear on fingernails and toenails thus making your nails slightly brittle and easily breakable. This nail condition is completely harmless and the lines eventually grow out when the nail lengthens naturally. It is caused due to everyday casual injuries like hitting or bumping your nail against a hard surface or accidentally jamming it between the door’s hinges. These little incidents and injuries can attribute the nail matrix by stopping the production of new cells in the nails. Other reasons why this could happen are zinc deficiencies, common side effects of chemotherapy, vitamin deficiencies, or reduced blood flow to the fingers, metabolic imbalance, and illnesses accompanied by high fever. Beau’s Lines do not need any specific medical treatment until you feel unbearable pain for a longer period of time.

How Does One Identify Beau’s lines?
Beau’s lines are horizontal or sloping depressions in the nails. They can be multiple fine lines or just a couple of lines or transverse depressions.

Is Beau’s Line Dangerous?
Not at all, Beau’s lines are completely harmless and nothing that you should be worried about.

Can Fungus Cause Beau’s Lines?
Yes, sometimes fungal growth or fungal infection can also cause or aid in increasing Beau’s lines.

How Long Does It Take For Beau’s Lines To Completely Heal?
It takes around 5 to 6 months for your nails to grow out completely, thereby eliminating the infected nail to grow out.

Does Beau’s Lines Need Immediate Medical Treatment?
No, there is absolutely no need to visit your doctor if Beau’s lines nail isn’t hurting. Follow the above-mentioned tips and let your nails breathe without any medicines or chemical treatments.

Mitali has worked as a beauty & fashion journalist for over 5 years. She finds her solace and magic in the power that can be created by weaving words together.

9 Tricks To Remove Your Nail...